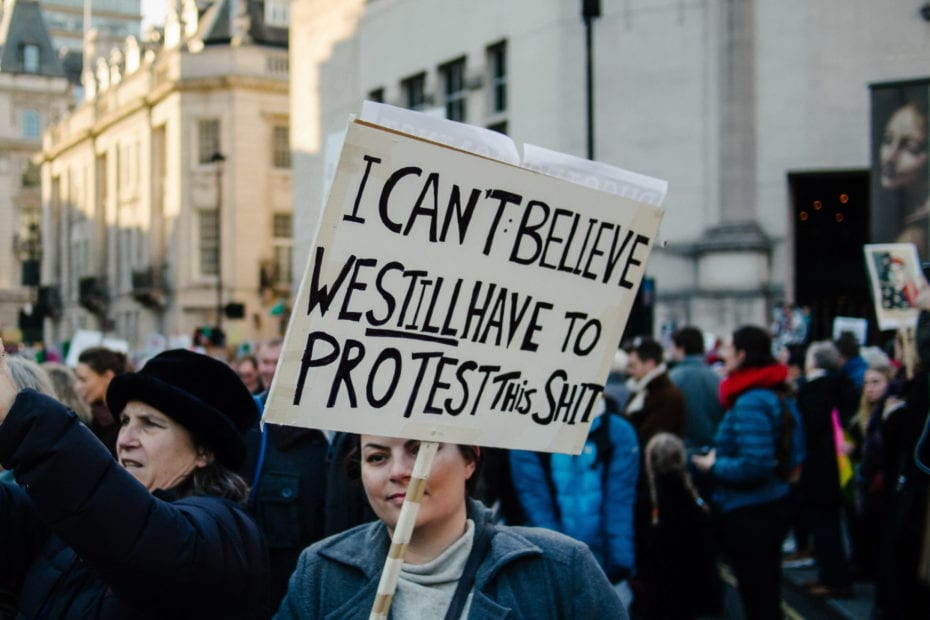 Gary here. Thanks for stopping by.

The sign above became popular a few years ago, and has applied to racial injustice, to women’s right to choose, workers’ right to assemble, LGBTQ right to marry who they love.

We have witnessed a wrenching week in America, spurred by the horrific images of a man killed by people sworn to protect and serve us all. The video brings brutally into focus the continuing injustice that has not been excised from our policing and judicial system since the Civil Rights movement so many years ago, but remained in full view for those who cared to look. America grapples with the long legacy of slavery, and the racism that continued thereafter. We need to examine, to understand. We need to protest this #%@!

At base, the events highlight a fundamental violence in humanity, that is associated with an “us” and “them” mentality, at its core a primitive tribalism. Our evolutionary history is from an animal nature, and we are risen apes rather than fallen angels. Evolution changes our animal natures slowly, and the ten thousand years since the beginning of agriculture has not been long enough to affect our biology.

Steven Pinker, in his book The Better Angels of Our Nature: Why Violence Has Declined, makes the case that humanity as a species has reduced violence in a continuous downward curve. With voluminous charts and graphs and detailed research, he hammers home his conclusion that humans have somehow become a more peaceful, tolerant species.

Yet what has changed? Pinker does not claim any strongly held single explanation (while offering many hypotheses) and mainly focuses on the facts of the change.

Since there is not an evolutionary reason, the meta-answer is that changes in human violence result from social change. It is only through social self-engineering that humans can rein in our worst inclinations. As we communicate, we create a shared moral outlook, and that perspective can move us toward a more empathetic and just treatment of one another.

Humankind can improve, can become more moral. In the words of Martin Luther King, “The arc of the moral universe is long, but it bends toward justice.” He didn’t say that as a deterministic statement, but as a hope and as an aim. It will not happen unless we work hard together for it. It is up to us to bend it toward justice.

What will America be like in 141 years? We certainly hope that racism will be long past. But what other kinds of inequality might still exist?

No matter how much our technology will change the outward appearances of our lives, the social challenges—how we live together, work together, and treat each other—will remain constant, demanding our attention to move humankind on the arc toward justice.

Now to the present: we need to listen to the voices who know the most about the current racism in our society.

Yes, unfortunately, we are still protesting this #%@!

1 thought on “Still Protesting This”